So you want to start a restaurant downtown in a big city, and you need to know how many people pass by the street in front of the store every hour. You also want to keep track of the numbers of males and females.  Question: how do you 正しく count the people using only a pen and a sheet of paper?

正 is a kanji which means “something right” or “correct”. A single Kanji can construct a lot of meanings by combining with other Kanji, so for instance 正解 means “a correct answer”, 正義 means “justice”, and 正確 means “precise”. 正しい is an adjective and “く” is one of the eight conjugated forms of adjectives in the Japanese language. If you are a Japanese, you may also use the kanji “正” to tally numbers. The number of strokes for 正 is five, which is the same number of fingers in a hand, and since we mostly use the decimal system in counting, it’s easy to do a sum in our head.

Shall we count the number of people passing in front of the store? First, you see a white-collared man walk down the street. Dutifully, you draw the first stroke of 正 under your male heading. Next, an old man passes, so you draw the second stroke. After that, a woman accompanying a little girl and her brother passes by and you draw a third stroke of 正 for the males and two new strokes of 正 for the females. 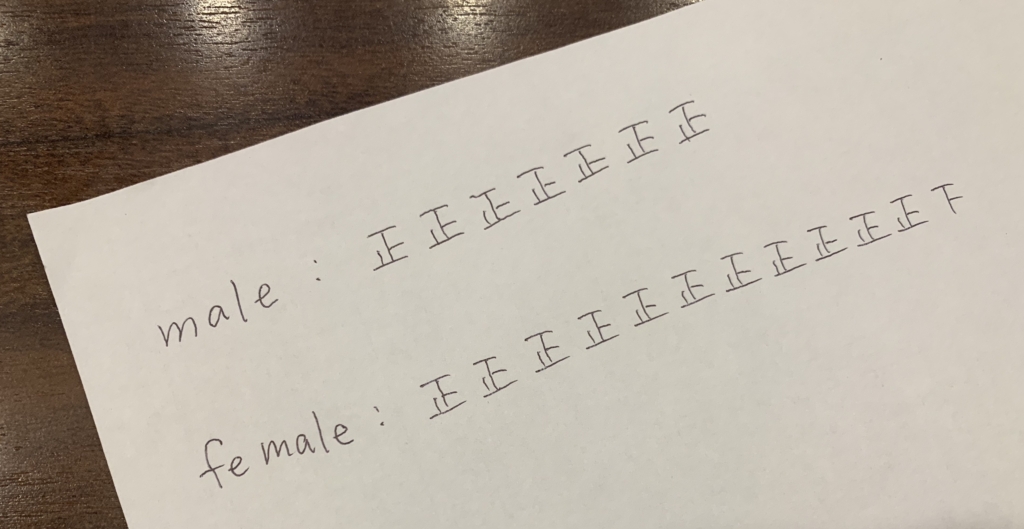 Continuing this process for an hour, let’s say that there is a total of seven 正s in the male line, and eleven 正s, plus an incomplete one with three strokes of 正, in the female line. From there you can just calculate the number. So for males that’s 7×5, and for females it’s 11×5 plus 3.

Learning kanji can be a pain because it seems like there are too many, but once you learn a few, you can start to see how they are combined, which will help when you are faced with reading documents written in kanji. You may even find that documents with less kanji are actually more difficult than ones with a lot of kanji! And Kanji aren’t only for reading and writing; kanji are used in calligraphy as art, transcribed in sutras for religious use, and this 正-counting method is another example of the unique usages of kanji.

Pronunciation of “L” and “R” in Japanese

Freelance writer/translator/interpreter. Firstly started the career as a freelance model, then switched to writing. Tokyo-based.